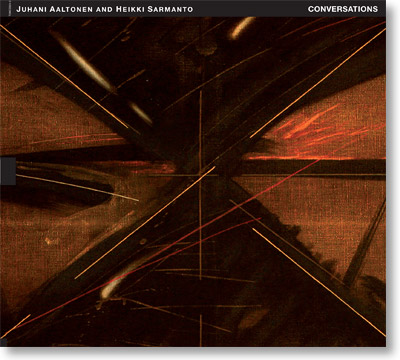 Conversations presents two Finnish jazz icons, Juhani Aaltonen and Heikki Sarmanto, in an extended musical conversation - an open dialogue. It is a collection of 16 improvisations either created spontaneously in the studio or by using Sarmanto´s compositions and even two standards as a launching pad - nearly two hours of improvised music altogether. Conversations is not their first duo album but it is without a doubt one of their very best, reflecting nearly five decades of shared musical history and their love for improvisation.

Aaltonen and Sarmanto first played together in the early 1960s and at this point they know each other so well that words have become unnecessary in their musical communication. Sarmanto says: "When we perform together as a duo, I often feel that we do so almost as one." This is what makes Conversations such a special collection: there is a focus on spontaneous but still strongly melodic, at times even romantic, improvisation that the two master musicians have both increasingly returned to during this latest stage in their careers.

Aaltonen and Sarmanto first played together in 1964 when Sarmanto asked Aaltonen to join his quartet for the taping of a studio performance for Tesvision, the first television channel in Finland. Even before this, they had both attended a legendary concert by the late John Coltrane at Helsinki´s Kulttuuritalo in November 1961 that made a huge impression on each of them. So, in a way, this record celebrates their shared path over the last five decades.

Pianist and composer Heikki Sarmanto (b. 1939) has been a leading figure in Finnish jazz as a pianist and bandleader since the mid-1960s and has been internationally acclaimed for his symphonic, orchestral and jazz ensemble works as a composer. As a young musician, Sarmanto participated in two of the most important early recordings of Finnish modern jazz, Christian Schwindt´s For Friends And Relatives and Esa Pethman´s The Modern Sound Of Finland. Soon after these sessions in the mid-1960s, Sarmanto decided to devote himself fully to contemporary jazz and has been leading his own groups ever since. He has also become known for his large scale orchestral projects, often with Aaltonen as the principal soloist, including New Hope Jazz Mass premiered in New York in 1978 and most recently the Winter War Requiem premiered in Tampere in 2009. Together, Aaltonen and Sarmanto have recorded 30 or so albums.

To celebrate the release of Conversations, Juhani Aaltonen and Heikki Sarmanto will perform as a duo at Restaurant Laulumiehet in Helsinki on December 8, 2011 at 7 P.M.