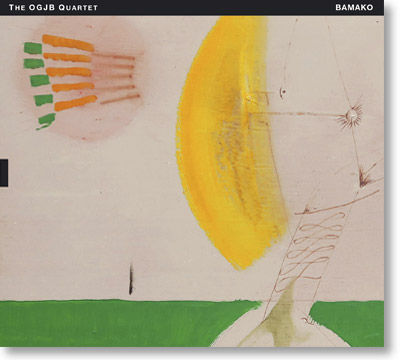 Bamako is the first recording of the New York-based collaborative group, the OGJB Quartet, that features four strong composers and leaders in their own right on their respective instruments, saxophonist Oliver Lake, cornetist Graham Haynes, bassist Joe Fonda and drummer Barry Altschul.

Ever since its first performance at the Winter Jazz Festival in 2016, the OGJB Quartet has been highly acclaimed as one of the most creative collaborative groups working today. Two of its members, Lake and Altschul, have been pioneers of modern improvised music since its origin in the 1960s, while the other two, Haynes and Fonda, have been a strong presence in the genre since the late 1970s. The recording features original compositions by all four artists and two collective improvisations.

The name of the band is an acronym of the first letter of each musician´s first name. In Oliver Lake´s words: "Music is the leader and that´s why it´s not under anyone´s name."

Says Fonda, "The music on this recording sings and strolls down the street, it swings, it dances, it swirls around your body like water and it grooves with a deep sense of its musical history. We feel that a perfect synergy is found within this quartet. What more could we ask for?"

Oliver Lake (b. 1942) is an accomplished saxophonist, flutist, composer, poet and visual artist. During the 1960s, Lake was one of the founders of the Black Artists Group (BAG) in his hometown of St. Louis. After living briefly in Paris in the early 1970s, Lake settled in New York and has led his own groups ever since. In 1977, he founded the World Saxophone Quartet with David Murray, Julius Hemphill and Hamiet Bluiett. He is also a co-founder of Trio 3 with Reggie Workman and Andrew Cyrille. Currently, Lake continues to lead his own groups, including the Oliver Lake Organ Quartet and the Oliver Lake Big Band, as well as perform with Trio 3.

Graham Haynes (b. 1960) grew up in Queens, New York, and is known as a cornetist and composer working in nu jazz, fusing jazz with elements of hip-hop and electronic music. Haynes first became more widely known in 1979 when he and alto saxophonist Steve Coleman together formed Five Elements, a key ensemble in the M-Base Collective. Soon, Haynes was also leading his own groups. Haynes has studied a wide range of African, Arabic and South Asian music and, after a move to Paris in 1990, incorporated these far-off influences into his next releases. Haynes returned to New York City in 1993 to take advantage of the flourishing hip-hop scene and, a bit later, drum n´ bass. Haynes has also worked on several critically acclaimed multimedia projects and composed music for films.

Joe Fonda (b. 1954) comes from upstate New York. After studying at the Berklee College of Music from 1973-75, he settled in New Haven playing and recording with Wadada Leo Smith, among others. Soon after moving to New York City in the early 1980s, Fonda participated in the collaborative group Mosaic Sextet. Fonda is also well known for his collaborations with Anthony Braxton between 1993 and 2003. In 1992, he co-founded with Michael Jefry Stevens the Fonda/Stevens Group. Fonda has also toured and recorded with the FAB Trio, From the Source, The NU Band, Bottoms Out, Conference Call, Off Road Quartet, Trio Generations and Eastern Boundary Quartet, among others.

Barry Altschul (b. 1943), was born and raised in New York City and is a veteran of highly influential groups with Paul Bley, Anthony Braxton, Chick Corea and Sam Rivers in the 1960s and the 1970s. Altschul has also led several groups of his own, particularly in the 1970s and the 1980s, recording some of the finest "freebop" albums of the period. After living in Europe for a decade and then focusing mostly on teaching following his return to New York City, Altschul returned to active playing in the new millennium establishing the FAB Trio (History Of Jazz in Reverse, TUM CD 028) with violinist Billy Bang and Joe Fonda in 2003. Since 2013, Altschul has led The 3dom Factor with saxophonist Jon Irabagon and Joe Fonda (The 3dom Factor, TUM CD 032, and Tales of the Unforeseen, TUM CD 044).