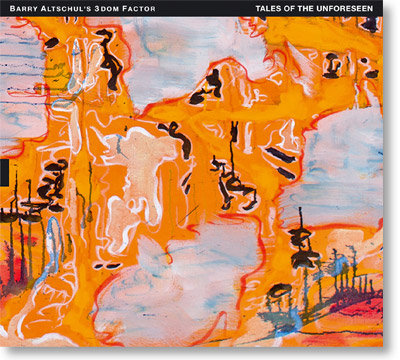 All Tales composed spontaneously by Barry Altschul, Jon Irabagon and Joe Fonda, except for "Ask Me Now" by Thelonious Monk, "Miracles" by Annette Peacock and "A Drummer´s Tale" by Barry Altschul.

On its first album in 2012, The 3dom Factor (TUM CD 032), Altschul, Irabagon and Fonda focused on performing Altschul´s compositions in a career retrospective that celebrated his 70th Birthday in 2013. Since then, the trio has grown into a true performing unit through tours and other live performances. As a result, their second album, Tales of the Unforeseen, focuses on spontaneous improvisation. In addition, the album includes the trio´s unique versions of two compositions familiar to Altschul from his past: Thelonious Monk´s "Ask Me Now" and Annette Peacock´s "Miracles".

"The basic approach for this recording was to play freely. Nothing was planned: no charts, no specific concepts - just play. Having finished a weeklong tour around the Northeast right before going into the studio, we were ready to just improvise", says Altschul. "At the end of our two days in the studio, there was so much material that the biggest problems were deciding what not to use and how to edit the music in such a way that would preserve its energy, flow and tension. In this case, I put the CD together as if it were a suite with different movements".

Barry Altschul (b. 1943) was born and raised in the South Bronx in New York City and is a veteran of highly influential groups with Paul Bley, Anthony Braxton, Chick Corea and Sam Rivers, among others, in the 1960s and the 1970s. Altschul led several groups of his own particularly in the 1970s and the 1980s, recording some of the finest "freebop" albums of the period. After living in Europe for a decade and then focusing mostly on teaching following his return to New York City, Altschul returned to active playing in the new millennium establishing the FAB Trio (History Of Jazz In Reverse, TUM CD 028) with violinist Billy Bang and bassist Joe Fonda and also performing on the New York scene with many of his contemporaries, such as Roswell Rudd and John Tchicai. In 2013, Altschul released his first album as a leader in a quarter century (The 3dom Factor, TUM CD 032) with Irabagon and Fonda.

Jon Irabagon (b. 1978) comes from Chicago but moved to New York City in 2003 to study at the Manhattan School of Music and later at the Juilliard School. He quickly began to play with many of his contemporaries active on the New York scene and has become known as one of today´s leading young saxophonists. Irabagon´s first recording as a leader, Outright! was released in 2008 and, that same year, he won the Thelonious Monk Saxophone Competition in Los Angeles, California, releasing another recording, The Observer, as a result. Today, Irabagon leads his own groups and is a member of Mostly Other People Do the Killing as well as groups led by Dave Douglas, Mary Halvorson, Jon Lundbom, Bryan Murray and Mike Pride, among many others.

Joe Fonda (b. 1954) comes from upstate New York. After studying at the Berklee College of Music in 1973-75, he settled in New Haven playing and recording with Wadada Leo Smith, among others. Soon after moving to New York City in the early 1980s, Fonda participated in the collaborative group Mosaic Sextet (with Dave Douglas, Mark Feldman, Michael Rabinowitz Michael Jefry Stevens and Harvey Sorgen) beginning some of the key relationships that still continue today. Fonda is also well known for his collaborations with Anthony Braxton between 1993 and 2003. In 1992, he co-founded with Michael Jefry Stevens the Fonda/Stevens Group that has released more than 10 recordings. Fonda has also toured and recorded with the FAB Trio, From the Source, The NU Band, Bottoms Out, Conference Call, Off Road Quartet, Trio Generations and Eastern Boundary Quartet, among many others.