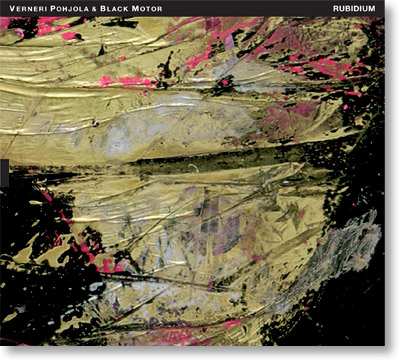 On Rubidium, much acclaimed Finnish trumpeter Verneri Pohjola, well-known from both the Ilmiliekki Quartet and his current Verneri Pohjola Quartet, joins forces with Finland´s leading trio of improvisers, Black Motor, or Sami Sippola on saxophones, Ville Rauhala on double bass and Simo Laihonen on drums.

Both Verneri Pohjola and Black Motor have won fame for being adept in melodically rich and expressive improvised music. On their first album together, Pohjola´s strong playing combines with Black Motor´s intense trio sound along with more lyrical material than on some of the group´s prior recordings. Pohjola´s compositions spoke to the members of Black Motor at first listen. "Verneri´s sensitive relationship with the melody and his strong compositions immediately felt like home to the members of Black Motor. He's a balancing element to our group", Simo Laihonen remarks.

Active since 2005, the Tampere -based trio Black Motor has labored itself into a veritable jazz phenomenon simply by playing their own vigorous and inspirational music and by largely creating their own performing opportunities, for example by organizing club nights at Tampere´s Telakka Restaurant together with special guests like saxophonist Juhani Aaltonen, guitarist Raoul Björkenheim, guitarist Jukka Orma, hip hop artist Hannibal - and Verneri Pohjola. The work is bearing fruit: the trio recently performed again at the Tampere Jazz Happening - now with saxophonist Mikko Innanen - and also played at the London Jazz Festival. However, the new Rubidium album with Pohjola is the first joint project that Black Motor has recorded.

The meeting of Black Motor and Verneri Pohjola at Culture Cafe Hertta in Tampere in spring 2009 started their still-continuing cooperation, which is now reaching one of its peaks in the form of Rubidium. Rubidium includes compositions from Verneri Pohjola and Ville Rauhala along with others like one of late Edward Vesala´s most beautiful compositions, "Kynnyspuulla" or "On the Threshold", and Nikolai Rimsky-Korsakov's "Song Of India". The record also features Rudy Wiedoeft´s "Sax-O-Phun" as a kind of tribute to master saxophonist Josef Kaartinen (1905-1992), whose repertoire included the song as early as in the 1920s.

Verneri Pohjola (b. 1977) has risen to the elite of Finnish jazz in the last few years. He first became known particularly through the Ilmiliekki Quartet and its well-received albums (March of the Alpha Males and Take It With Me as well as Vi sålde våra hemman together with vocalist Emma Salokoski), but has also performed with many other groups, including his ever-changing Aurora ensemble (Aurora), Michelin Star together with Joonas Riippa (Michelin Star) and the Verneri Pohjola Quartet (Ancient History). Pohjola has also been featured as a soloist with the UMO Jazz Orchestra (Agatha) and Orkestrova and performed with the Meta4 string quartet.

Black Motor is an improvisational trio from Tampere in Central Finland that has been performing for almost eight years and has already released seven albums of its own. Black Motor plays uncompromising free jazz in the spirit of their early idols, Albert Ayler, Peter Brötzmann and Rashied Ali, combined with more traditional forms of jazz expression. The trio has also been influenced by other forms of rhythm music from just about the entirety of the music´s hundred-year history. Cooperation with various special guests has been an essential part of Black Motor's operation, including not only musicians but also poets, dancers and performance and circus artists.