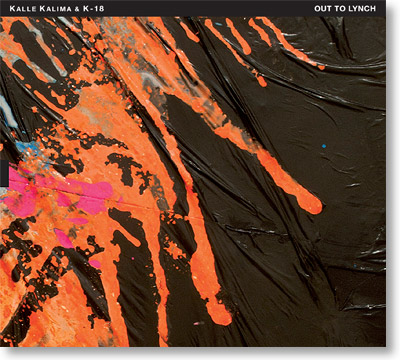 On their second release, Kalle Kalima & K-18 continue to present composer and guitarist Kalle Kalima´s aural impressions of the world of movies. Whereas their first album included Kalima´s compositions inspired by Stanley Kubrick´s films, Out To Lynch presents his reflections on some of director David Lynch´s key movies, such as Blue Velvet, Eraserhead, Lost Highway, Mulholland Drive, The Elephant Man, Twin Peaks and Wild at Heart.

With this recording, Berlin-based Kalle Kalima has created another unique album that is rich in sonic colors and constantly alternating moods. Just like its predecessor (Some Kubricks Of Blood, TUM CD 022), the album does not aim at re-scoring the music in David Lynch´s films, but rather uses some of the key characters and locations in the movies as an inspiration for Kalima´s compositions and the group´s collective improvisations.

Kalle Kalima says that "The films of David Lynch have inspired me since I was a teenager. His style is unique in that his films are like Russian matuschkas consisting of different layers. The mystical places, that he has created, bring up feelings that are hard to define in words."

"The music on this recording is not a soundtrack but, rather, each piece is a reminiscence of the initial feeling that Lynch´s movies left in my mind when I first saw them. Musically, I wanted to combine elements of jazz improvisation with soundscapes coming more from modern classical music and avant-garde rock. Our goal as a group is to work on a collective sound and create something that is unique to us. The music has a lot of room for improvisation and the biggest challenge for us is to combine the composed and improvised material."

Out To Lynch was recorded in the outskirts of the old East Berlin at Studio P4, a studio originally built for the State Broadcasting Company (Rundfunk) of Deutsche Demokratische Republik (DDR), or the German Democratic Republic.

Kalle Kalima (b.1973) is one of the central ambassadors of the vivid contemporary Finnish jazz scene. After taking up residence in Berlin in 2000, Kalima has collaborated with the likes of trumpeters Wadada Leo Smith and Tomasz Stanko, saxophonists Juhani Aaltonen and Anthony Braxton, pianist Heikki Sarmanto, guitarist Marc Ducret, bassists Greg Cohen, Teppo Hauta-aho, Sirone and Ed Schuller, composer Simon Stockhausen and vocalist Linda Sharrock as well rock/pop artist Jimi Tenor. Kalima is particularly well known as the leader of several highly acclaimed ensembles of his own or collaborative groups, such as K-18, Klima Kalima, Johnny La Marama, Momentum Impakto and Soi Ensemble,as well as his solo project, Kalle Kalima Pentasonic. He has also performed as the featured soloist of the Umo Jazz Orchestra and other large orchestras.

Featured with K-18 (Finnish for a film "not allowed for viewers under the age of 18") are again saxophonist Mikko Innanen, bassist Teppo Hauta-aho and accordionist Veli Kujala, each an acknowledged master of his chosen instrument.

Saxophonist Mikko Innanen (b.1978) is one of the most innovative saxophonists and composers on the current Finnish and Nordic jazz and improvised music scene and a long-term colleague of Kalima´s. Teppo Hauta-aho (b.1941) on the double bass can draw on five decades´ worth of experience playing improvised music in various guises, not only with virtually every Finnish jazz musician but also with the likes of Anthony Braxton and Cecil Taylor. Finally, the role of accordion player Veli Kujala (b.1976), who is renowned not only as a soloist in classical orchestral works but also as an improviser, is essential to the group´s sonic texture. His use of the quarter-tone accordion lends itself to building melodies around microintervals, a feature central to Kalima´s compositions here.

To celebrate the release of Out To Lynch, Kalle Kalima & K-18 will perform at Restaurant Laulumiehet in Helsinki on Sunday, October 7, 2012 at 7 P.M.