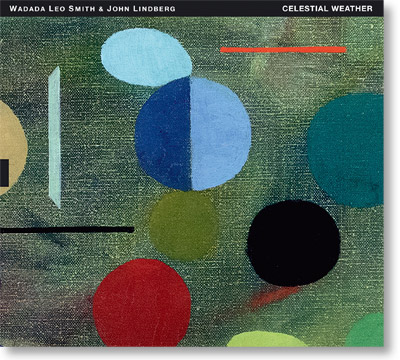 With Celestial Weather, the focus of trumpeter and composer Wadada Leo Smith´s longstanding collaborations with bassist and composer John Lindberg shifts to open duo improvisation, something they have often done in live performances over the last three decades but never before on a recording.

Celestial Weather opens with Smith´s composition dedicated to the great, late AACM bassist Malachi Favors Maghostut and closes with Lindberg´s "Feathers and Earth". The five-part suite that gives the collection its name, "Celestial Weather Suite," was spontaneously created in the studio.

Although the duo traces its origins to the late 1970s, when the two first played together in Anthony Braxton´s Creative Orchestra, John Lindberg has become a key collaborator of Wadada Leo Smith particularly in the new millennium and is currently a member of a number of Wadada Leo Smith´s ensembles. He has also been featured on Smith´s recent large orchestral projects, Ten Freedom Summers and Occupy the World. Throughout this duo recording, Smith and Lindberg demonstrate their closeness and deep understanding of each other´s music by their instant reactions and constant dialogue that elevate Celestial Weather to the very top tier of improvised duo recordings.

"John Lindberg is a master musician - a composer and performer who is always developing new projects and leading his own ensembles," says Wadada Leo Smith. "He never shows up for a rehearsal or a performance without being completely in touch with the music and his musical intelligence always helps to keep the performance intact."

After reflecting on a duo performance in 1990, John Lindberg observes: "With our previously established substantive artistic and personal connection becoming fully forged at this juncture, we moved forward - as astutely conscious interconnected creative beings - into the future of so much more great music and friendship. This recording forms a perfect documentation of that."

Wadada Leo Smith (b. 1941), who was part of the first generation of musicians to come out of Chicago´s Association for the Advancement of Creative Musicians (AACM), has established himself as one of the leading composers and performers of creative contemporary music. In the late 1960s, Smith formed the Creative Construction Company together with saxophonist Anthony Braxton and violinist Leroy Jenkins and, since the early 1970s, he has mostly led his own groups, which currently include the Golden Quartet, the Great Lakes Quartet, Mbira, Organic and the Silver Orchestra, among others. In 2012, Smith released his most extensive recording to date, Ten Freedom Summers. In 2013, he released Occupy The World (TUM CD 037-2), a recording of six extended compositions performed by TUMO, a 22-member improvising orchestra. The Great Lakes Suites (TUM CD 041-2, a double-CD with Henry Threadgill, John Lindberg and Jack DeJohnette) was broadly hailed as one of the albums of the year in 2014.

John Lindberg (b. 1959) first became known as a member of the Human Arts Ensemble in the late 1970s and of Anthony Braxton´s quartet and other ensembles from 1978 until 1985. In 1977, Lindberg, James Emery and Billy Bang co-founded the String Trio of New York which, despite a number of changes on the violin chair, has performed to great acclaim for nearly four decades. Most recently, Lindberg has performed as a solo bassist and with his trio, BLOB, as well as Tripolar and the genre-busting trio JazzHopRevolution, among others. Lindberg´s compositions have been featured on more than 60 recordings by groups led or co-led by him. Beginning in 2005, Lindberg has been a member of several of Wadada Leo Smith´s groups, including the Great Lakes Quartet, Golden Quartet, Organic and Silver Orchestra.