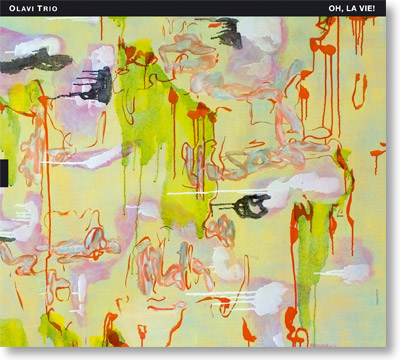 With its second album, Oh La Vie!, the Olavi Trio focuses on trio improvisation rather than featuring special guests as it did on its first release. As always with this group, the emphasis is on spontaneous improvisation with the music being created in the moment.

The Olavi Trio consists of bassist Teppo Olavi Hauta-aho, trombonist Jari Olavi Hongisto and drummer Niilo Olavi Louhivuori, who share not only the same middle name but also a mutual love for free improvisation. Collectively, they are among the finest Finnish improvisers of the past three generations, with Hauta-aho having risen to the forefront of the music in the 1960s, Hongisto in the 1980s and Louhivuori in the beginning of the new millennium.

Whereas the Olavi Trio´s first album (Triologia, TUM CD 026) featured some of their best friends - Juhani Aaltonen, Kalle Kalima and Verneri Pohjola - as special guests, their second release focuses on what audiences have come to love in their live performances, namely, open and equalitarian trio improvisation.

For more than 10 years, the main principles of Olavi Trio have been to maintain total democracy within the group and to create music in the moment while performing or recording, without any rehearsals or other preparations. This approach was followed also on Oh, La Vie!.

Oh, La Vie! includes 12 compositions that were either spontaneously created in the studio or improvised using as a starting point themes composed by the trio´s members. Like the Olavi Trio´s first album, this one also closes with a tango closely associated with their namesake, master vocalist Olavi Virta, as "Kun Ilta Ehtii" gets its own unique interpretation in celebration of the Centennial of Virta´s birth.

Jari Hongisto (b. 1960) first became known to a broader audience through Edward Vesala´s groups, including Sound & Fury, in the 1980s. More recently, Hongisto has performed with the UMO Jazz Orchestra and the Iro Haarla Sextet, among others. During the past decades, Hongisto and Hauta-aho have often played in the same groups, such as Quintet Moderne (with soprano saxophonist Harri Sjöström, violinist Philipp Wachsmann and drummer Paul Lovens) in the 1980s and Sound Kitchen (with guitarist Hase Poulsen) in the late 1990s. The two have also played, together and separately, with numerous leading Finnish jazz musicians, including saxophonists Juhani Aaltonen and Seppo "Baron" Paakkunainen, trumpeters Mike Koskinen and Jarmo Sermilä and pianists Eero Ojanen and Heikki Sarmanto.

Teppo Hauta-aho (b. 1941) started his career in the early 1960s and quickly rose to the front line of European improvisers. Hauta-aho led his own groups and collaborated with drummer Edward Vesala in the late 1960s and early 1970s. He later has performed with leading musicians such as saxophonist Anthony Braxton and pianist Cecil Taylor, in addition to many Finnish and other European improvisers. At the beginning of the new millennium, after 30 years as a full time orchestra musician, Hauta-aho retired and returned to again playing improvised music more actively. Besides Olavi Trio, he now performs with guitarist Kalle Kalima, among others.

Olavi Louhivuori (b. 1981) first became known as a founding member of the Ilmiliekki Quartet, but has since led his own groups and performed as a solo drummer as well as a being member of the Sun Trio, among others. In recent years, Louhivuori has increasingly performed internationally, for example, as a member of trumpeter Tomasz Stanko´s quintet and in groups led by bassist Mats Eilertsen and vocalist Suzanne Abbuehl.