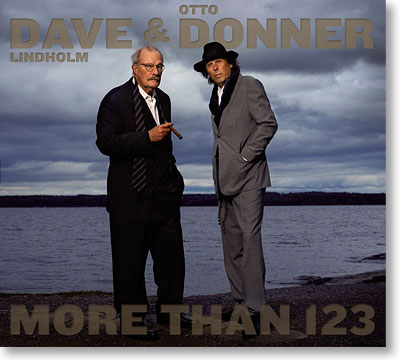 More Than 123 is an inspired teaming of two giants of the Finnish jazz, rock and blues scenes, Dave Lindholm and Otto Donner. It also launches a new sub-label for TUM Records: TUM Alternative, which will feature new music that straddles the conventional boundaries between jazz, rock, blues and world music.

Guitarist, songsmith, lyricist and raspy-voiced (think Bob Dylan meets Tom Waits) vocalist Dave Lindholm made his debut in the early 1970s and has since become one of the most beloved rock and blues interpreters in his home country of Finland. His early albums for the famed Love Records are classics that live on from generation to generation, and by now he has recorded over 30 albums as a leader.

Yet Dave Lindholm has remained a well-kept secret from audiences abroad, though he does not really mind; the music, rather than its external rewards, is what matters to him.

The same can be said of composer, arranger and producer Henrik Otto Donner. With over five decades of experience in all areas of the music business, it is safe to say that Donner is a true legend in Finnish jazz and popular music but relatively unknown outside of the Nordic region, in part, because of his somewhat limited output as a recording artist.

Beginning with his days as the trumpeter of the Christian Schwindt Quintet, which recorded the first truly modern Finnish jazz album in 1966, Donner has produced, arranged and played on countless classic Finnish recordings ranging from jazz to classical avant-garde and from rock to political song. His first collaboration with Dave Lindholm happened already in 1982 and resulted in the legendary album Aino.

On More Than 123, Otto Donner once again proves his knack for producing a beautifully balanced album of blues-infused jazz that manages to sound both timeless and current, sophisticated yet not overly polished. For the fans of Dave Lindholm, the album serves as further evidence of something they know already, that Lindholm is not only a unique vocalist but also a great guitar stylist.

From the New Orleans -influenced "Lucky Johnny's Gone" to the deep, expertly arranged jazz of "Where You're Walking Now", Lindholm´s and Donner´s collaborations are more heartfelt than ever.