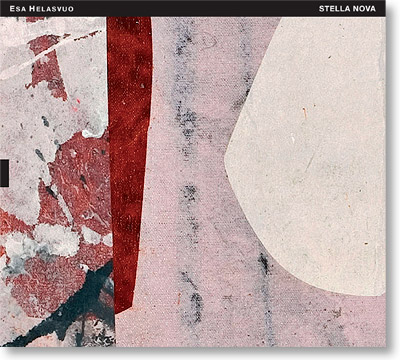 Stella Nova is the first new release by pianist Esa Helasvuo in over 20 years. On Stella Nova, Helasvuo, one of the pioneers of Finnish improvised music, presents us with nine improvisations and a lingering, touching interpretation of the classic Finnish tango "Satumaa" by Unto Mononen.

Esa Helasvuo´s solo piano recording Stella Nova is his first recording in over 20 years and a true tour de force from this perhaps currently lesser known but truly fine improviser. At the same time, this new recording celebrates the four decades that have passed since the release of Helasvuo´s first recording as a leader in 1973.

The emphasis on Stella Nova is on quiet ballad-like improvisations, like "To Feel You Is To Love You", "Intimacy" or "Boa Noiti Meu Amor," a reinterpretation of Helasvuo´s original duo improvisation with drummer Edward Vesala in 1977. Still, there are also moments of real strength, such as the title tune "Stella Nova" and "Kisumu." The closest reference points for this music are likely to be the earlier solo piano recordings by some of Esa Helasvuo´s better known contemporaries, including Paul Bley, Chick Corea and Keith Jarrett.

"Free improvisation is like a train trip: rationality and chaos take you in opposite directions but you always reach your destination," Helasvuo has observed.

Esa Helasvuo (b.1945) belongs in the first generation of Finnish musicians who grew to maturity in the 1960s focusing particularly on improvised music although he began his career with The Sounds, a popular Finnish pop group, in 1964. His first jazz recording was also from the year 1964 with the Martin Brushane Four. Helasvuo took his first steps as an improviser at the famous Mäyränkolo Club in Helsinki and often shared the stage during the late 1960s and early 1970s with the leading Finnish jazz musicians of the period, including Juhani Aaltonen, Henrik Otto Donner, Teppo Hauta-aho, Eero Koivistoinen, Matti Oiling, Seppo Paakkunainen, Christian Schwindt and Edward Vesala. He was also a member of the Seppo Rannikko Orchestra together with Rannikko, Pekka Sarmanto and Esko Rosnell.

In the early 1970s, Helasvuo released three recordings that became classics of Finnish improvised music of the day. Think-Tank-Funk, Helasvuo´s first recording as a leader, combined influences from rock, jazz and chamber music and was released in 1973. His following two recordings were released by Finland´s most legendary independent record label, Love Records, and included the solo piano album Omat Hommat (1974) and his recording with Edward Vesala and a string ensemble, Q (1977), which became early landmarks of Finnish improvised music. Later, Helasvuo also released Singing Grand (1990), which featured him both as a solo pianist and as a soloist with a chamber orchestra.

During the 1970s, Helasvuo worked for a few years as a music dramaturge for the Finnish Broadcasting Company (YLE) and, since that time, as a lecturer at the Sibelius Academy, where he guided young musicians and future music teachers into the secrets of improvisation until his retirement in 2008. After retiring, Helasvuo has again increasingly focused on performing and free improvisation.

Although Stella Nova is his first recording in more than 20 years, creating new music has always been present during Helasvuo´s career. In addition to working as a pedagogue, he performed with various projects and composed a large amount of music for the stage, films, television and radio in addition to music composed for various orchestras and choirs. Altogether, Helasvuo has composed music for over 60 radio plays and approximately 30 theater plays, feature films and TV movies. He is also known for his projects with vocalists Eija Ahvo and Susanna Haavisto as well as his collaborations with vocalists Vesa-Matti Loiri, Ritva Oksanen and Matti Salminen, among many others.

Helasvuo includes among his many sources of musical inspiration such early favorites as Thelonious Monk and Oscar Peterson and such later influences as Keith Jarrett and also, in particular as a composer, Frank Zappa.