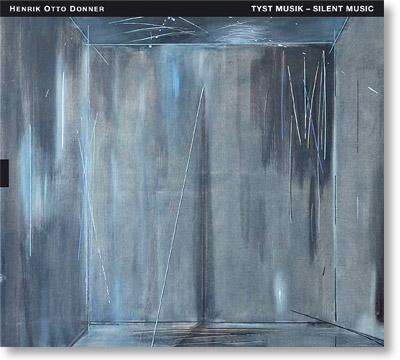 TUM Records releases Tyst musik - Silent Music, one of the last recordings of composer Henrik Otto Donner´s music prior to his death in June 2013. "Tyst musik - Silent Music" is a song cycle that sets to music 18 poems by author Johan Bargum, Donner´s friend and longstanding collaborator. It is also the first song cycle based on the classical lied tradition that is composed to a text by a Finnish-Swedish writer and a rare example of a new composition in this demanding genre.

Henrik Otto Donner and Johan Bargum began work on "Tyst musik - Silent Music" in the beginning of the 1990s and it was first performed by baritone Walton Grönroos and pianist Izumi Tateno at the Joensuu Song Festival in Finland in 1992. The song cycle was later performed by baritone Raimo Laukka and pianist Gustav Djupsjöbacka in Turku, Finland, and at two concerts in Ireland in 1993. Most recently, the song cycle was performed by baritone Gabriel Suovanen and pianist Markus Vaara at the October of New Music Festival in Oulu in 2010 and again in Turku in 2012. Following the latter of these performances, "Tyst musik - Silent Music" was recorded at Karelia House in Tammisaari in August 2012 with Henrik Otto Donner himself as producer.

Henrik Otto Donner and Johan Bargum began their collaboration in the 1960s and before "Tyst musik - Silent Music," their final major cooperation, they had already worked together in connection with a number of theatrical and musical productions with Donner setting Bargum´s texts to music. Bargum was also one of the Finnish-Swedish writers featured on Donner´s final big band recording in the fall of 2012, And It Happened (TUM CD 039), with the song "Bedjan (Entreaty)," which also formed the fourth movement of Donner´s 6-part orchestral suite Dalens ande (The Spirit of the Valley).

"Tyst musik - Silent Music" was the result of Donner´s and Bargum´s discussions concerning music and art. "We discovered that we both had a fondness for the German lied tradition and, of course, Schubert´s immortal song cycles. And so the idea for a new song cycle was born, something a little different than our previous theatre and choir music collaborations," says Bargum.

"´Tyst musik - Silent Music´ is the story of a school teacher whose life has gone wrong. The text varies between his problems today and in the past; behind the windows in a mental institute, Hesperia, he wonders why things have turned out as they have. It was clear from the beginning that the text would be written in rhyme and partially in classical Greek metre and that, like its famous predecessors, it would tell a story. "The idea was to use Otto´s expressive music to form a fruitful tension between tradition and modernity," says Johan Bargum. "I know that Otto enjoyed working with the text, and I know that Silent Music´ came to be a work of which Otto was very fond."

On this recording, "Tyst musik - Silent Music" is performed by Gabriel Suovanen, a Stockholm-born baritone with Finnish roots, together with Markus Vaara, one of the foremost lied pianists in Finland today.

"Donner´s Tyst musik - Silent Music´ is one of the most important lied cycles of our times," says Markus Vaara. "It is in parts very powerful and takes both the audience and its performers through extreme emotional changes. The song cycle is technically and emotively very demanding for both the singer and the pianist. It would make a fine addition to the song contest and lied concert repertoires in Finland."

Tyst musik - Silent Music is published with the support of the Swedish Cultural Foundation in Finland.

Henrik Otto Donner (1939-2013) studied composition at the Sibelius Academy in Helsinki from 1958 to 1963 and, after that, privately at the Siemens Electronic Music Studio in Munich and with György Ligeti in Vienna, among others. During the course of a career that lasted more than five decades, Donner was a versatile composer, with music ranging from classical orchestral compositions to political songs and from jazz big band works to film music. As a jazz musician, he was widely considered one of the most gifted trumpet players of his generation in Finland. Donner composed music for 21 films and a number of television features and plays. He also composed more than 1,000 songs, a number of orchestral works, chamber music, choral music, a lied cycle and a musical.

Johan Bargum (b.1943) made his debut in 1965 with Svartvitt (Black and White), a collection of short stories. He has subsequently published a total of 16 novels and collections of short stories. Bargum is known for his stylistically honed prose; his texts have a remarkable linguistic flexibility and clarity. His books have been translated into more than ten languages. Bargum has also written for the theatre. Together with Bengt Ahlfors, he wrote the play Are There Tigers in the Congo? (Finns det tigrar i Kongo?) in 1986, one of the first plays in Finland to deal with AIDS. The play has been performed in more than thirty countries and has been translated into more languages than any other Finnish play.

Gabriel Suovanen (b. 1974) was born in Stockholm with Finnish roots. He has studied singing at the Sibelius Academy in Finland and at the University College of Opera in Stockholm and has successfully taken part in many international song contests. In 1997-98, he was the Artist in Residence at the Swedish Radio with many concert performances and radio broadcasts as a result. He has performed at all of the major opera houses in the Nordic region and at many other European opera houses as well. In addition to opera, Suovanen enjoys giving lied recitals. He frequently performs with Swedish and Finnish symphony orchestras, and has made several recordings for the Ondine label. He has also recorded Jean Sibelius´ songs for the BIS label and participated in a number of opera recordings.

Markus Vaara (b. 1972) plays the piano and the organ and he has made a name for himself as one of his generation´s foremost lied pianists in Finland. He works as a répétiteur at the Oulu Conservatory and accompanies Finland´s leading vocalists on an ongoing basis. In addition to performing in Finland, Vaara has performed in Germany, the Netherlands and Sweden, among other countries. Vaara studied the piano and the organ at the Oulu Conservatory in Finland and the Piteå School of Music in Sweden under Jouko Tötterström, Maija Lehtonen, Gary Verkaden and Miklos Spanyi. He has also attended Master Classes with, among others, Eero Heinonen, Matti Raekallio and Konstantin Bogino. In 2002, Vaara was awarded the pianist prize at the Poleeni lied competition in Pieksämäki, Finland. He also works as a producer and featured artist in an internet television project, with a focus on classical music.