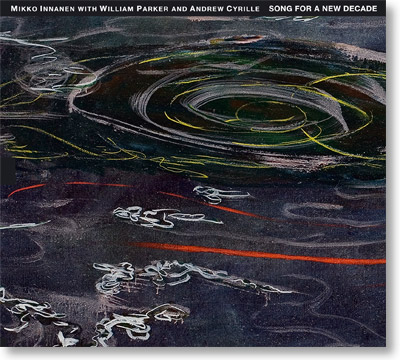 Song for a New Decade (TUM CD 042-2) features Finnish saxophonist Mikko Innanen, one of the most compelling new voices in European improvised music, with two American legends of the music: bassist William Parker, who rose to prominence during New York´s loft jazz era of the 1970s, and drummer Andrew Cyrille, who is one of the elders of improvised music going back to the early 1960s.

"I was excited but also a bit nervous before having my first musical meeting with William Parker and Andrew Cyrille, two leading improvisers of their respective generations and creators of truly unique sounds on their instruments. Quite soon I realized, however, that with these kind and supportive men all I needed to do was to relax, be myself and enjoy the ride," says Innanen. "As a duo, Andrew and I improvise freely - no compositions, rules or other preconceived plans are involved. It feels so easy and effortless to do so with him - we can visit any musical place and move to any direction we fancy. To me, that´s true freedom."

In the past decade, Mikko Innanen (b. 1978) has become an undisputed leader on the Nordic and European jazz scene. His studies at the Jazz Department of the Sibelius Academy in Helsinki and at the Rhythmic Music Conservatory in Copenhagen led to many of the musical collaborations that still continue today in groups like Delirium, Kalle Kalima & K-18, Gourmet, PLOP and Triot. In addition to his own groups, Innkvisitio and the 12-piece Mikko Innanen 10+, Innanen also leads two New York-based trios and has frequently performed with players of his own generation active in New York City. He has participated in close to 50 recordings as a leader, co-leader or featured member of an ensemble.

William Parker (b. 1952) entered the music scene during New York´s loft jazz era in the early 1970s. He quickly became a much sought-after bassist playing primarily with fellow avant-gardists, such as Don Cherry, Frank Lowe, Jemeel Moondoc, Cecil Taylor, Charles Tyler and Frank Wright, among others. Parker´s key collaborators have also included his spouse, dancer Patricia Nicholson, as well as Roy Brown, Rob Campbell, Hamid Drake, Charles Gayle, Joe Morris, Matthew Shipp and David S. Ware. Since the early 1990s, Parker has increasingly led his own ensembles, including In Order To Survive, The Little Huey Creative Music Orchestra and the William Parker Quartet. To date, he has released over 40 albums under his own leadership.

Andrew Cyrille (b. 1939) began recording and performing with the likes of Walt Dickerson, Coleman Hawkins, Roland Kirk, Mary Lou Williams and others when barely 20 years of age. However, Cyrille truly made his mark with his more than a decade-long tenure with the Cecil Taylor Unit in the 1960s and early 1970s. He has become one of the most respected drummers in modern jazz through both of his own recordings as a leader and through his collaborations with virtually every important name on the contemporary scene. Since the 1970s, Cyrille has led or co-led a number of ensembles, including Maono, The Group, the percussion quartet Pieces Of Time, Haitian Fascination and Trio 3. He has released more than 30 recordings as a leader or co-leader and countless others as a sideman.