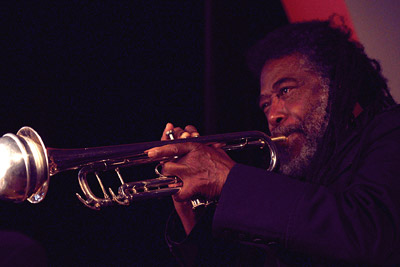 "Pure Love" is composed for the iconic Rosa Parks (1913-2005), a person of exceptional courage and wisdom, who made the right move of resistance at the right time. Her action generated a movement worldwide for liberty and justice for human beings.

Pure Love to Anthony Braxton and in remembrance of Leroy Jenkins (1932-2007) and Steve McCall (1933-1989). Our shared journey as creative artists was beneficial to each of us, and had a powerful impact on our friendship and artistic thinking. That ensemble (Braxton, Jenkins, Smith, McCall) impacted the world with its profound musical application and artistic integrity.

Pure Love is the expression that describes my relationship with my daughters and their families. Sarhanna, Kashala, Lamar, N´dasia, Jaya, Belle, Lamar Delray and Kathy. From them, I have always received the greatest support and their true love and response to the art I make. It is their love that keeps me strong and is the reason I make art. "Now is the time to counter lies with facts, repeatedly and unflaggingly, while also proclaiming the greater truths: of our equal humanity, of decency, of compassion. Every precious ideal must be reiterated, every obvious argument made, because an ugly idea left unchallenged begins to turn the color of normal. It does not have to be like this." Chimamanda Ngozi Adichie, The New Yorker, December 2, 2016

Wadada Leo Smith´s oratorio dedicated to Rosa Parks is in many ways a culmination of his multi-faceted, extensive body of work approaching the intersection of human rights, the potency of individual action in the arc of history, and spiritual expression. It is simultaneously a deeply personal statement and a powerful political statement, acting as a reminder that the perpetual struggle for human rights and justice depends on the bravery and moral strength of individuals, but also requires grounding in history, intellectual astuteness, and hard-nosed pragmatism.

Unifying those elementsoften seen as disparateis one of the most consistent themes in Smith´s oeuvre, informing both the content and the shape of the unique musical language, Ankhrasmation, that Smith has developed over the course of his career. Ankhrasmation can be distilled into three core principles. First, the division of music into "long" and "short" sounds, emphasizing their temporal proportionality versus their tonal relationship. Second, the use of "rhythm units" to demarcate the relative proportion of sound and silence between each "long" and "short" grouping. Third, the use of visual elements to enhance notational options. Combined, these features promote a fluid sense of time, maximize creative opportunity, and establish a flexible compositional system emancipated from the constraints of traditional Western notational conventions. Ankhrasmation also provides a new methodology of composing specifically for the aspects of jazz and blues that are most resistant to standard notation, and in many ways represents an evolutionary step in the blending of Western and African systems that were so central to the founding of jazz and its subsequent development. It is also uniquely suited to deliver the cultural, musical, historical, and spiritual synthesis around which Smith´s work revolves.

Applying Ankhrasmation to the traditional oratorio form, usually reserved for religious themes, represents both an ambitious undertaking and a potent statement in and of itself, recasting the pantheon of civil rights leaders and the movement itself in terms often associated with prophets and religious expression, while evoking themes of universal love, salvation, and redemption.

To fully appreciate the complexity, profundity, and deeply personal nature of "Rosa Parks: Pure Love" it is also critical to revisit the importance of Rosa Parks as an individual and her role as catalyst for one of the most significant turning points in the global struggle for equity.

Rosa Parks´ place in history has been firmly cemented as a key actor in the American Civil Rights movement. Her decision on December 1, 1955 to refuse to give up her seat to a white passenger on the segregated bus system of Montgomery, Alabama, and her subsequent arrest unleashed one of the most massive demonstrations against the horrors of racial oppression yet seen and galvanized a wave of protest, legal action, and nationwide organizing that would eventually shatter the seemingly impenetrable edifice of segregation.

Yet mythologies continue to exist regarding Rosa Parks, at least in the popular imagination.

Rosa Parks was not simply a brave individual whotired and exhaustedtook an organic, spontaneous stand, unaware of its import, as some have depicted. As secretary of the Montgomery, Alabama chapter of the National Association for the Advancement of Colored People (NAACP), Rosa Parks was an engaged member of the civil rights community, keenly aware of the movement´s contours, the high stakes of her action and its potential consequencesthough no one could possibly have predicted just how electrifying a moment her fearless, thoughtful act became.

The result of Parks´ action was an immediate call by civil rights and church leaders to boycott the Montgomery bus system. Despite systematic attempts to break the boycott, harassment and violence against its participants, the boycott ultimately lasted 381 days, and resulted in a tremendous legal ruling finding the segregation laws unconstitutional. This courthouse victory was, however, only one offspring of the boycott. The conflict became a platform for the young preacher and eventual civil rights leader Martin Luther King, Jr. to come forward as a potent figure. It garnered widespread national media and political attention, uniting likeminded voices from different faiths and backgrounds across the country in solidarity, and perhaps most importantly, it empowered African-Americans, in the heart of Jim Crow country, to take direct action against centuries of violent, systematic oppression. And it proved victory was possible.

It is also important to recognize that Rosa Parks´ action did not occur in a vacuum. Her choice was informed by decades of struggle, an articulated strategy formulated by civil rights leaders including Thurgood Marshal, Bayard Rustin, E.D. Nixon, and more. It came against the backdrop of increased national attention to the civil rights movement, as well as the building tension between the dominantly legal strategies of leading civil rights organizations and a growing sentiment among others that the time was ripe for more direct intervention to strike at the heart of oppression, right in the belly of the beastthe Deep South. It provided a platform to declare immoral laws unjust and therefore untenable, and established a methodology for people to stand together and challenge those laws directly, through non-violent protest and immediate action. It gave voice to the movement within the civil rights establishment that wanted to demand freedom now, not at a deferred, undefined future point.

In short, Rosa Parks´ action was that of a fearless individual, but also representative of a process that had been building for decadeseven centuries. It released a torrent of change that reshaped American society and resonated beyond to inform global struggles that remain ongoing today. And as Smith´s work postulates, the potency of that change is part of a never-ending pursuit for greater equity and justice, a struggle that is as non-linear as Smith´s music, requiring constant vigilance and a constantly renewed commitment to the core values of humanism, love, and justice that were the foundational pillars of Martin Luther King, Jr.´s inspirational message.

I started to compose the songs for "Rosa Parks: Pure Love" about a week before August 2016.

On August 8, my daughter Sarhanna was hit by a car; the driver ran through a four-way stop sign and hit her while she was in the middle of the crossway. When admitted to the hospital, she was in an intensive care unit for six days.

After Sarhanna had been released from the hospital, we went on vacation to a house on the cost of Nantucket in Rhode Island. There, our family went through a healing process with her.

I worked on the songs everyday while in Nantucket. After coming home, I began to play the songs but realized that I had given them a texture that was too hard for what I intended for this music. While working on the songs in Nantucket, I felt anger and helplessness, because there is nothing a family can do when something like this happens to them.

So, we practiced love, kindness and healing together with Sarhanna, hoping that this will not happen again to any family.

Afterwards, I needed to re-compose the songs. Being still in the moment of inspiration, I decided to add two new songs to the oratorio. The songs and the music were composed and completed eight weeks later.

The first performance of "Rosa Parks: Pure Love" took place on September 24, 2016 at The New School, Alvin Johnson/J.M. Kaplan Hall in New York City as part of the program for the Festival of New Trumpet Music.

Loving souls our hearts were forged in
In the fire of the burning bush
As we crossed the bending arc of history.

After 300 days of struggle we created
A new life for the lovers -
With open hearts filled with victory.

If victory or defeat awakes our journey
Then from the Great Love,
A wholesome balance will condition our lives.

The light from our hearts crystalize a democracy of human action.
A free people.

This victory is the first on the highway of
Justice.

In a pitch dark world Martin´s light shines
For justice.

Whoever came into that light lives forever.
Go ahead my beloved,
And hear Martin´s mountain-top prophesy.

He is with us and will always be amongst the lovers.

We have not a democracy
When Twenty-Eight states have Fifty-Six senators
California only two.

The people´s vote is the law and the way to liberty.
We can´t wait.

If we are a democracy
We must resolve this crisis now.

My life is action with love
And with peace my will is strong.
No fear.

There is only truth.

If you feel the light you are right.

Nothing can be greater than love.

Who can know the love of a pure heart?
That´s the truth.

I have learned over the years, oh
That when one´s mind is made up, oh this diminishes fear.
Knowing what must be done, does away with fear.

Knowing what must be done, does away with fear.

I conquered myself with love for humanity.
And when the road of life gets hard I keep moving.

As a people we will stand in life until
The sun rises from the west.

Rosa is with us and will always be
Amongst the lovers.

Revenge and bitterness are the worst kind of hatred,
They poison the soul.

And often others are blamed for our troubles.
But, know this.

It is a sacred right to find our place in life.

The true lovers fill up their hearts
With light and love.

What will come to us no one can stop it.
And what is not in our future no one can make it happen.

Martin Luther King, Jr. taught us the meaning of
True Love.
He said, "Love is not just Éros or Philia,
But true love is the greatest notion captured in the word Agápe."

The true lovers fill up their hearts with light and love